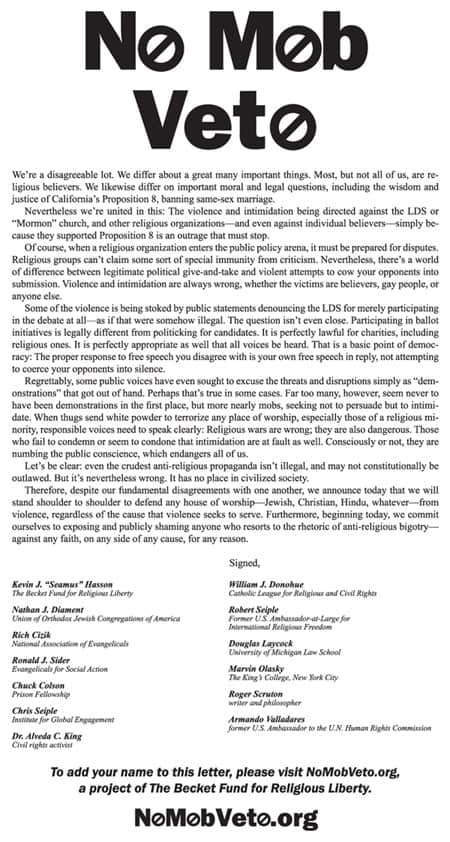 On Tuesday I reported that the Becket Fund for Religious Liberty was preparing a full-page ad for the New York Times condemning violence against religion, which they claim occurred during protests following the Proposition 8 in California. Proposition 8, which was funded to the tune of over $20 million in Mormon contributions solicited by the Church of Latter Day Saints, revoked the civil rights of millions of Californians by effectively banning same-sex marriage in the state. The Becket Fund’s ad ran today and you can read it above. 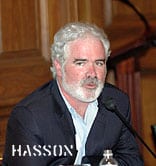 The ad is attached to a website, NoMobVeto.org, and solicits signatures endorsing a campaign to”expose and publicly shame anyone who resorts to the rhetoric of anti-religious bigotry — against any faith, on any side of any cause, for any reason.”

The ad makes reference to envelopes containing white powder sent “to terrorize places of worship.” Those envelopes were under investigation by the FBI at last report and the incident was condemned by LGBT leaders, among them Equality Utah’s Public Policy Manager Will Carlson, who said: “We have no idea what the source is of this vandalism or white envelopes, whatever. But there is no place in this dialogue, in this dialogue that needs to happen, for violence, no place for vandalism and no place for intimidation.”

Said Becket Founder Kevin “Seamus” Hasson in a letter sent to Towleroad regarding the ad placement: “This is a lesson America had to learn the hard way, overcoming bigotry against Jews, Catholics, and other religious minorities, and we are committed to not letting the country forget it.”

UPDATE II: GLAAD calls for letters to the NYT…