A San Francisco federal appeals court stood by its ruling to reinstate the case of Margaret Witt that was dismissed by a trial judge and challenged the military’s “Don’t Ask, Don’t Tell” policy. Witt had served as an Air Force reservist flight nurse for 20 years until she was ratted out by a citizen in her home town of Spokane who, according to her attorney, called the Air Force and told them she was living with her female partner there: 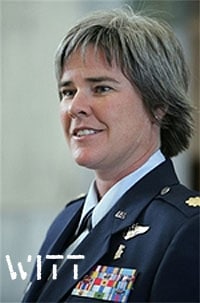 “The 9th U.S. Circuit Court of Appeals declined to have an 11-judge panel review a ruling in which a three-judge panel in May allowed Maj. Margaret Witt to go ahead with a lawsuit in federal court in Seattle…She contends the discharge violated her constitutional right to due process…The circuit court’s action means the next step in the case is now either a return to U.S. District Court in Seattle for further proceedings or an appeal to the Supreme Court, if the U.S. Justice Department chooses to appeal. Justice Department spokesman Charles Miller said, ‘We’re considering our options’ and said no decision has been made on whether to appeal. The government has 90 days to file an appeal, and thus the decision on whether to do so could be made by the administration of either President Bush or President-Elect Obama. Miller said he did not know when the determination will be made.”