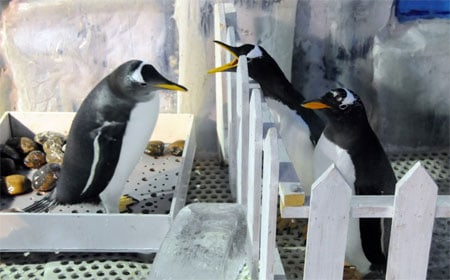 A pair of gay penguins in China who were segregated from others after repeated attempts to steal eggs so they could raise a child of their own were apparently given some eggs to look after by zookeepers after animal rights groups complained, the Daily Mail reports:

“In response, zookeepers gave the pair two eggs laid by an inexperienced first-time mother. ‘We decided to give them two eggs from another couple whose hatching ability had been poor and they’ve turned out to be the best parents in the whole zoo,’ said one of the keepers. ‘It’s very encouraging and if this works out well we will try to arrange for them to become real parents themselves with artificial insemination.’ Wildlife experts at the park explain that despite being gay the three-year-old male birds are still driven by an urge to be fathers. ‘One of the responsibilities of being a male adult is looking after the eggs. Despite the fact that they can’t have eggs naturally, it does not take away their biological drive to be a parent,’ said one.”

The photo is apparently the fenced-in gay penguin pair having an argument with a neighbor.

Previous Post: « Gay Couple Campbell and Callea to Perform Together for Xmas Show
Next Post: Versace Plans Hotel with Refrigerated Beach in Dubai »