Homophobic Moscow Mayor, Yuri Luzhkov, who last week told an AIDS conference that he suppresses the opinions of gays because they spread AIDS, told a press conference that representatives of sexual minorities were welcome at next year’s Eurovision song contest in the city, as long as they don’t express themselves in public. 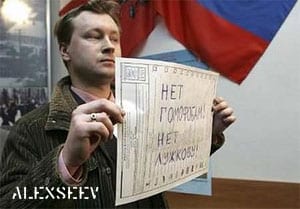 Said Luzhkov: “Entertain yourself, no problem, but not on the streets, squares, marches and demonstrations. We never introduced any limitations on them, except public actions.”

Moscow Gay Pride organizer, activist Nikolai Alekseev, said that a gay pride parade planned for that week would go ahead as scheduled:

“We are not going to surrender our right to freedom of assembly and expression because it is given to us not by Mayor Luzhkov but by the Constitution on this country. I will be shocked if thes words of the Moscow Mayor do not lead to any reaction from theGeneral Secretary of the Council of Europe and Commissioner for Human Rights of the Council of Europe. I can not believe that officials in Strasbourg will continue to silently accept these and future breaches of the European Convention on the part of Russian officials. The time for press-releases and statements is over. It is time for effective action.”