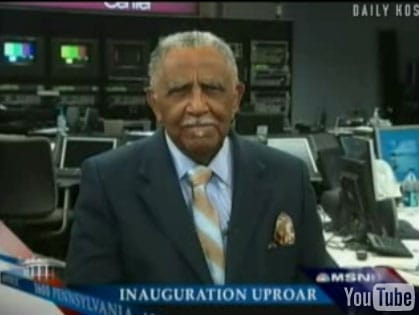 Rev. Joseph Lowery, the pastor giving the benediction (the other religious component) at Obama’s inauguration, is not for same-sex marriage either, though he does condemn Rick Warren’s equation of gay partnerships with incest and pedophilia.

“I’ve never said I support gay marriage. I support gay rights and I support civil unions. Like a whole lot of people, I have some difficulty with the term gay marriage. Because deep in my heart, deeply rooted in my heart and mind, marriage is associated with man and woman. So I have a little cultural shock with that. But I certainly support civil unions, and that gay partners ought to have all the rights that any other citizens have in this country.

“I think [Warrens equation of gay partnerships with incest and pedophilia is] wrong. I condemn it. I take all kinds of sharp and robust differences with that kind of denigration. But even so, I will not refuse to be on a program with him because we have these differences. That’s what the president-elect proposes to do. Bring people together with different views and hopefully out of these discussions and out of association we can find common ground to serve common good.”

Previous Post: « The Curious Case of the Imaginary Benjamin Button Poster
Next Post: Rachel Maddow on Rick Warren: Obama, This is Not Going Away »