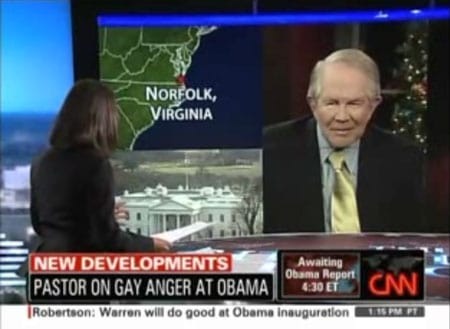 CNN went to longtime homophobe Pat Robertson to get his $.02 on the Rick Warren controversy, asking if he agreed with Tony Perkins that Warren was being used as a “pawn” by Obama.

Said Robertson: “[Rick Warren] has his own agenda. I think he’ll stick to it. After all, he’s been asked to give an invocation. He hasn’t been asked to endorse Obama.”

As a special bonus they got an answer out of him on whether or not he agrees with Colin Powell that the ban on gays in the military should be repealed.

Said Robertson: “It seemed to be the unanimous decision of the military leadership that the question of open homosexuality in the barracks and the showers was not a good thing for the discipline of the troops.”