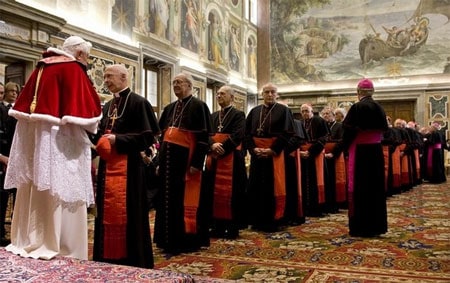 Both will apparently destroy humankind.

“Pope Benedict said on Monday that saving humanity from homosexual or transsexual behaviour was just as important as saving the rainforest from destruction. ‘(The Church) should also protect man from the destruction of himself. A sort of ecology of man is needed,’ the pontiff said in a holiday address to the Curia, the Vatican’s central administration. ‘The tropical forests do deserve our protection. But man, as a creature, does not deserve any less.’….The pope said humanity needed to ‘listen to the language of creation’ to understand the intended roles of man and woman. He compared behaviour beyond traditional heterosexual relations as ‘a destruction of God’s work’. He also defended the Church’s right to ‘speak of human nature as man and woman, and ask that this order of creation be respected’.”

Previous Post: « Jason Mraz Wants You to Put Your Balls into The Holiday
Next Post: Madonna Makes Love to Jesus Over the Holidays »