The AP reports on tomorrow’s planned nationwide action “Day Without a Gay” in which gay people and allies are being urged to take the day off from work and engage in community service, as an offshoot demonstration related to California’s passage of Proposition 8: 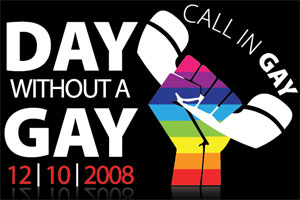 “Organizers of ‘Day Without a Gay’ — scheduled to coincide with International Human Rights Day and modeled after similar work stoppages by Latino immigrants — also are encouraging people to perform volunteer work and refrain from spending money. Sean Hetherington, a West Hollywood comedian and personal trainer, dreamed up the idea with his boyfriend, Aaron Hartzler, after reading online that a few angry gay-rights activists were calling for a daylong strike to protest California voters’ passage last month of Proposition 8, which reversed this year’s state Supreme Court decision allowing gay marriage. The couple thought it would be more effective and less divisive if people were asked to perform community service instead of staying home with their wallets shut. Dozens of nonprofit agencies, from the National Women’s Law Center in Washington to a Methodist church in Fresno collecting food for the homeless, have posted opportunities for volunteers on the couple’s Web site.”

Others, they note, have expressed uncertainty about the strategy:

Said Jules Graves, 38, coordinator of the Colorado Queer Straight Alliance: “It’s extra-challenging for people to think about taking off work as a form of protest, given that we are talking about people who may not be out (as gay) at work, and given the current economic situation and job market. There is really not any assurance employers would appreciate it for what it is.”

“Join The Impact, the online community that launched protests last month over the passage of gay marriage bans in California, Florida and Arizona, has urged people to withdraw $80 from their bank accounts Wednesday to demonstrate gays’ spending power, and to devote the time they might otherwise spend watching TV or surfing the Internet to volunteer work.”

“Witeck-Combs Communications, a public relations firm in Washington that specializes in the gay and lesbian market, published a study this year that estimated that gay and lesbian consumers spend $700 billion annually. Bob Witeck, the firm’s chief executive officer, said it would be difficult to measure the success of Wednesday’s strike since gay employees occupy so many fields. And rather than suspending all consumer spending for the day, gay rights supporters would have a bigger impact if they devoted their dollars to gay-friendly businesses year-round, Witeck said.”