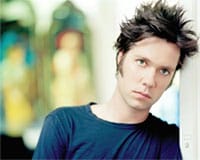 From an interview in the New York Press:

“Oddly enough, I’m actually not a huge gay marriage supporter. I personally don’t want to get married but I think that any law or amendment to the constitution that deals with sex and love should just be banned in general. I don’t think any government should encroach on what goes on in the bedroom at all. Frankly, if you want to marry a dog, why don’t you go ahead and marry a dog, I don’t care. I’m a complete libertarian and so I really disagree with it.”