Approximately 150 supporters of same-sex marriage protested Mormon involvement in the passage of Proposition 102 in Arizona, rallied at a Christmas display lighting ceremony at the LDS Temple in Mesa on Friday: 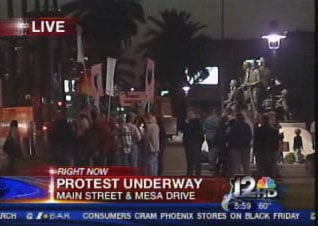 “The biggest donors to the Yes 4 Marriage campaign in Arizona, before the primaries, were Nancy and David LeSueur and Kathleen and Wilford Andersen, two prominent Mormon families in Mesa. Each family donated $100,000 cash, according to campaign-finance records. The idea for the vigil came from friend Bobby Parker, who helped [Clinton] Bartlett pull the event together on short notice. Parker, 64, came out to his Mormon family in January 2007. ‘I lost my family, lost my church,’ he said. The demonstration was peaceful, with participants holding candles and signs that read ‘Peace’ and ‘Acceptance.’ Some vehicles driving by honked in support of the demonstrators, but one person threw a dirty diaper out the window at them.”

Proposition 102 amended the state constitution to declare marriage between a man and a woman.

Watch a news report on the protest, AFTER THE JUMP…

Previous Post: « Jason Statham: Hypothetical Gay Action Hero
Next Post: Another Round of Anti-Gay Attacks Coming Down the Pike? »