A new statewide survey of California voters reveals that education and income were as influential as many other factors in the failure to defeat Proposition 8 in California: 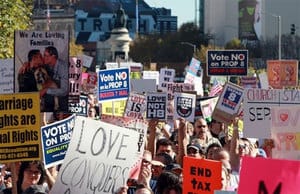 “The new survey by the Public Policy Institute of California of 2,003 Californians who voted Nov. 4 found significantly less support for Prop. 8 among blacks than had been indicated by exit polls. Election Day exit polls triggered recriminations between gay rights advocates and black leaders. And now the new data indicates that 61 percent of Latinos voted for the ban, an even higher percentage than exit polls indicated on Election Day. But while a majority of non-white voters backed a ban on gay marriage, the key finding in the new survey was that voters’ position on Prop. 8 was determined more by their level of education and income than their race or ethnicity, said PPIC president Mark Baldassare. Among Californians with a high school diploma or less, 69 percent voted for Prop. 8. Among college graduates, 57 percent voted against it. ‘Both among whites and non-whites, among college graduates and among upper-income voters, Prop. 8 lost,’ Baldassare said. ‘Among both whites and non-whites, among non-college graduates and lower income voters, Prop. 8 won. It seems to me that some of what we attributed to race and ethnic differences really had to do with a socioeconomic divide in regard to same-sex marriage.'”

Added Baldassare: “[If the state sees more growth among groups who are less educated and less affluent,] “then you are not necessarily going to see a situation where you have growing support for gay marriage in California. It has to do with exposure to different ideas. It’s perceptions about lifestyle differences, tolerance for differences, broader view of social trends and issues — all those things tend to come with more education.”

It also showed Republicans and Evangelical Christians were among the measure’s biggest backers. Big surprise there.