Yesterday I posted about a controversy surrounding Urban Outfitters after the chain pulled a T-shirt that said “I support same-sex marriage” from the shelves. Many suspected the move was purely political, since the chain’s founder has contributed to many right-wing politicians and causes. 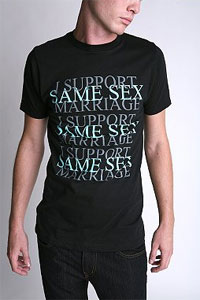 And as for the company’s politics:

“Meanwhile, the spokesperson also confirmed what our commenters speculated: Glen Senk, the CEO of the parent company, Urban Outfitters, Inc., is an openly gay man who has been in a committed relationship for over 30 years. However, Richard Hayne is still the founder and current chairman and does indeed have a record for supporting right-wing Republicans who are against abortion and gay rights.”