The Equality Summit, hosted by Equality California, was attended by what appeared to be 300-400 people. The day consisted of plenary sessions as well as breakout sessions. During the plenary sessions, executives of the ‘No On 8’ campaign, leaders in the marriage equality movement and various political consultants who had been hired to run the ‘No On 8’ campaign discussed disparate aspects of the failed operation.

Some of the highlights of the presentations by the panel were a rehash of the Matt Foreman article posted by Towleroad last week titled Californiaʼs Proposition 8–Ours To Lose? Nope. It Was Always An Uphill Climb. 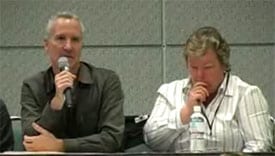 Geoff Kors, Executive Committee member of ‘No On 8’, stated that the ‘No On 8’ campaign worked with social psychologists who interviewed people opposed to marriage equality even though they supported housing and employment rights for GLBT people. What they found was that ʻrights argumentsʼ did not appeal to this group of people when emotional appeals did. This resulted in the ʻGarden Weddingʼ ad which tests showed was highly successful in changing peopleʼs opinion to favor marriage equality. Kors said that the “biggest mistake is that we turned everything over to political consultants.”

Chad Grifﬁn, a political consultant with Grifﬁn/Shockey, said that no private poll ever showed that our side was winning Proposition 8. In fact, four weeks prior to the vote, private polling showed our side was losing by 17 points. Many of the panel members, including Kors and Lorri Jean stated that they had wanted to release this information to alert the GLBT community that we were in danger of losing Prop 8, but paid political consultants advised them not to release that data for fear it would strengthen the ‘Yes On 8’ campaign.

Some of the most interesting information was presented by San Francisco pollster David Binder, who found that political ideology was the factor that was most predictive of a vote to support Proposition 8. Binder found ‘yes’ votes among 22% of liberals, 51% of moderates and a whopping 81% of conservatives. The next most important factor was religiosity. Voters who attend worship services once per week or more supported Proposition 8 at a rate of 70%, while those who attended worship services less frequently voted for Proposition only 36% of the time. Sadly, polling showed the outcome of Prop 8 prior to the vote was more important to supporters of the measure than it was to those opposed to it. More of David Binderʼs research can be found on Equality California’s blog. (Here is his Powerpoint presentation)

In the afternoon, the group was surprised by the appearance of Los Angelesʼ telegenic mayor, Antonio Villaraigosa who said “We all have equality not only under the law but also in the eyes of God. Iʼm going to stand with you every step along the way, not because it is popular, but because it is the right thing to do. With marriage equality we will ﬁnally stamp out the last frontier of bigotry.”

Some video from the summit, AFTER THE JUMP…

Previous Post: « Grace Jones: My Portraits Watch Me from the Walls
Next Post: Milk Film the Target of Online Gay Bashing »