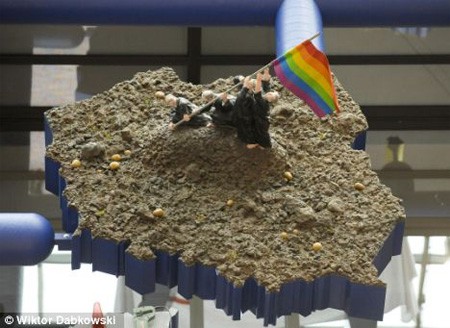 An art installation commissioned by the Czech Republic, current holders of the EU Presidency, has angered some and amused others for its satirical representations of various nations in the European Union. The artwork, which shows the various nations arranged on a blue grid and is set to “go life” (become animatronic with noises) later this week: 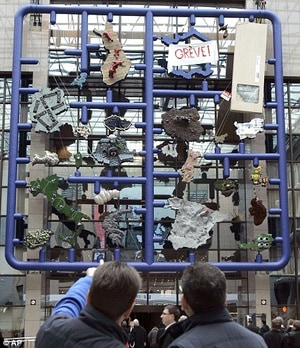 The Daily Mail reports: “France’s map is emblazoned with the word GREVE! (French for strike) in red, a reference to its frequent industrial disputes, Romania is a Dracula theme park after its most famous fictional character and Sweden is a do-it-yourself IKEA furniture flatpack. Controversially, Britain has been deliberately left off the map entirely in an apparent jibe at our euroscepticism. Bulgaria is represented as the floor of a toilet, Lithuania features five men in army uniforms urinating on Russia and Greece is on fire – a reference to the violent riots that have blighted the country in recent weeks. Austria is represented as a nuclear power station, Estonia is pictured with a hammer and sickle and Luxembourg is made of Nazi gold with a ‘For Sale’ sign sticking out of it. The Netherlands is depicted as a sea with minarets rising from the waves, in an apparent reference to simmering religious tensions that culminated in the murder of Dutch film director and Islam critic Theo van Gogh by a Muslim militant in 2004. Poland, one of Europe’s most religious nations, has priests waving a rainbow flag – a symbol of pride for gay communities. The decision to leave Britain off the air-fix style map was taken by the British artist Khalid Asadi who sought to highlight Britain’s uncertain relations with the EU by cutting it out altogether. However, his official explanation was more baffling. ‘This improvement of exactness means that its individual selective sieve can cover the so-called objective sieve,’ said Mr Asadi. Lorraine Mullally, director of Open Europe, said Britain was fortunate to have escaped a far more embarrassing national stereotype such as pregnant teenagers, drunken louts vomiting in the street or football hooligans.”

The installation is on display outside the EU headquarters in Brussels, and was condemned by the Czech government after they learned the artist, David Cerny, had also lied about its creation:

“The work, entitled ‘Entropa’, was mean to be the joint work of artists representing each EU member country. However in yet another bizarre twist today, the Czech artist who had the original idea – David Cerny, famed for painting a Soviet tank pink – admitted today that he had duped the EU into thinking artists from each country had contributed. The reality was, he admitted, that all of the sculptures had been done by himself and a friend.”