The Washington Blade reports that a “prominent Democratic activist” says that Obama has selected two more gay men and a lesbian for White House posts:

“David Medina, a gay man who is a former national political director for John Edwards’ presidential campaign, has been tapped as deputy chief of staff for Michelle Obama. Medina is a member of the Human Rights Campaign’s board of directors and has a seat on the organization’s public policy committee.

“Dave Noble, a gay man led efforts to mobilize gay voters for Obama’s presidential campaign, will serve as the White House’s liaison to NASA, the activist said. Noble was formerly an official with the National Stonewall Democrats and the National Gay & Lesbian Task Force. Watch Towleroad’s interview with Dave Noble at August’s Democratic National Convention in Denver, AFTER THE JUMP… 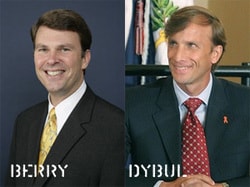 Yesterday, it was reported that Obama was expected to name Clinton Assistant Interior Secretary John Berry the Office of Personnel Management where he would act as Obama’s principal advisor in matters of personnel administration. It was also reported that Obama would keep Bush appointee Mark Dybul on as Global AIDS Coordinator.

Watch Towleroad’s interview with Dave Noble at August’s Democratic National Convention in Denver, AFTER THE JUMP…