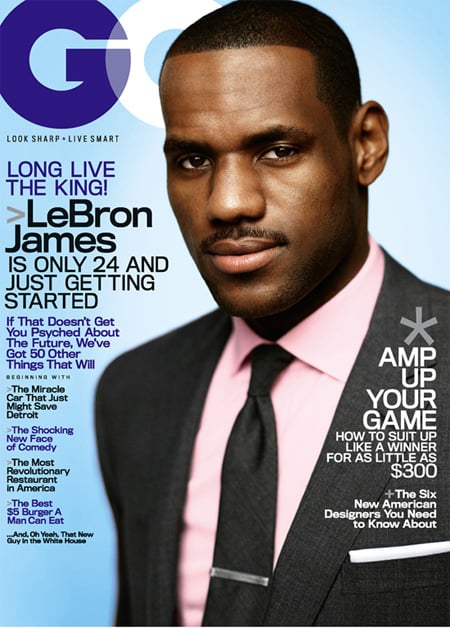 A team of GQ editors went to Cleveland to play basketball with the 24-year-old. Later they found themselves at a gay club, and realized that some LGBT people and those who hang with them may actually care about sports:

“Later that night, after eating dinner and drinking 200 cans of Schlitz at a little place in the Tremont district of Cleveland called the Prosperity Social Club (if I lived in Cleveland, I would go there every day to eat and drink and pump quarters into the jukebox), we went round and round talking about different moments in the game, mocking ourselves and expressing our awe at him and trying to tease out that quality I was just talking about above. We were sitting next to a wood-burning stove, and we looked around and realized there was some sort of LGBT event going on that night. We were the only people in there who weren’t L or G or B or T. There was a lot of ABBA coming out of the jukebox. I imagined there aren’t a whole lot of places in Cleveland that the L’s and G’s and B’s and T’s feel this at-home, and so I also imagined that this was probably one of the few spots in town, and this one of the few crowds, where the fact of LeBron James doesn’t matter a whole lot. I’m stereotyping, I know, but you get what I mean. But then the owner came over to us, a fantastically friendly woman who’d heard about our playing LeBron that day and wanted to know how the game went. Turns out the Prosperity Social Club was in the running to be the location for an ad shoot featuring LeBron, and she was keeping her fingers crossed. It would mean a lot to them.”

When John Amaechi came out in early 2007, James said he’d rather an athlete be out of the closet: “With teammates you have to be trustworthy and if you’re gay and you’re not admitting that you are, then you are not trustworthy. So that’s like the No. 1 thing as teammates – we all trust each other. You’ve heard of the in-room, locker-room code. What happens in the locker-room stays in there. It’s a trust factor, honestly. A big trust factor.”