Billie Jean King talks to Tennis.com about her coming out of the closet in 1981, and gays in tennis today: 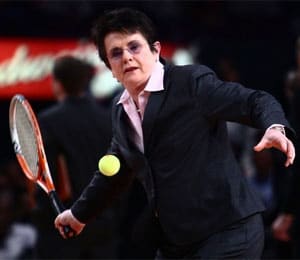 “Within 24 hours I lost all my future income. I was just getting ready to leave the game. And I had all these wonderful contracts happening. And I was finally going to make some money. Because my generation didn’t make any of the big bucks the way the next generation did. It was really an important time for me to have my financial security, and that wasn’t going to happen. I think all that helped though. I think every time somebody comes out, it just pushes us forward. It’s harder for people once they know you. They have a harder time thinking it’s wrong.”

King also says that while she’s known gay male tennis players, there needs to be support from the athletes at the top of the game for them to be able to come out: 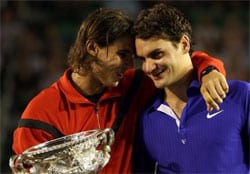 “I know everyone’s talked about it before – just saying, ‘I wonder who will do it and when?’ We know a couple of guys who have been gay but they couldn’t do it. They couldn’t do it. It’s tough, man. I think everyone should come out on their own terms. Obviously I feel that way because I didn’t. I would never out someone. I lived it. We’re never going to be 50 percent of the population. We need straight people, particularly in the male arena, to support the gay guys. They have to. And if they stand up for us, that’s how we gain acceptance. We need our friends, or brothers and sisters, especially if they have influence. Federer and Nadal and those guys have to say we don’t care. Once the influence starts to talk like that, it makes a huge difference. It’s got to be the top players. [They] influence where the tour goes. That’s part of the responsibility of being in the Top 10, the Top 5 in the world. That goes hand in hand with making the big bucks, getting the most exposure, getting the most endorsements. That’s part of the deal, I think, if you’re going to be in that position. And our job in that position is to stick up for whoever is getting a bad deal. I wish we could get a guy at the top of his game just saying I’m gay, let’s move on, next. But it’s got to be while he’s playing. While he’s at the top of his game. But they’re going to take a lot of heat, man.”