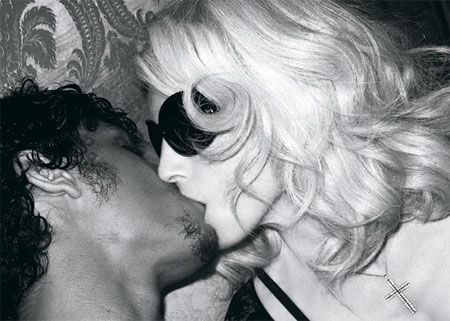 Madonna has Brazilian model Jesus Luz wrapped like a red string around her finger, according to a British tabloid.

Luz has decided to pursue Kabbalah and made note of it on his personal website, writes The Mirror:

“Jesus’s family are very traditional and quite religious so this news is sure to come as something of a shock. But Jesus is totally taken with Madonna and is slightly in awe of her. Quite simply he can’t get enough, and finds her utterly compelling and bewitching. The pair have spent a lot of time together in recent weeks and Madonna’s chatted quite freely about her personal beliefs – especially Kabbalah. He has taken a real interest in it and started making a few online enquiries into the faith. He has joined an online Kabbalah group and is keen to become an active member. Madonna has also offered to take him to the Kabbalah centre in New York and he is exceedingly keen to take her up on that.

Writes Jesus, according to the tab: “It is not important what others think about us. The most important thing is to have a clear conscience, even if I am condemned. We can not forget that Jesus was condemned.”