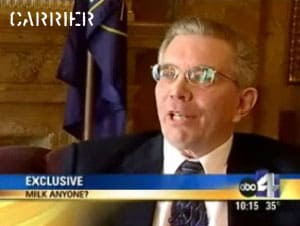 Said Carrier to ABC4: "When I heard Senator Buttars comments, I was disgusted and appalled. I thought that would help restore the reputation of the state of Utahthat has been dragged through the sewer by Senator Buttars…If somebody wanted to set up an account to fund the memorial, I amwilling to donate a hundred dollars of my own money.' Carrier, aretired teacher and now wed to the same woman for four decades, thinksgay marriage or civil unions are inevitable. He feels the same wayabout a Milk statue at Utah's capitol. 'I know they're not going to putit up today or next year. Ten years? I think so…I am doing this out of a sense of justice for the gay community and not just for the gay community, it’s for everybody."

Activists are planning a Buttars-Palooza on the lawn of Utah's state capitol tomorrow beginning at 1 pm.

Watch an interview with Carrier about his idea, AFTER THE JUMP…

Previous Post: « Pussy Galore: Just Looking at This Makes Me Want to Sneeze
Next Post: Sean Hannity Freaks Out Over Gay Kisses at the Oscars »