Minnesota gay Republican lawmaker Paul Koering says he will not vote for a marriage equality bill which was reportedly “gaining traction” and attracting sponsors in the state senate last week. 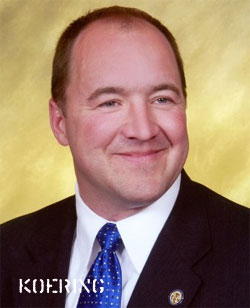 The Minnesota Independent reports: “State Sen. Paul Koering, R-Fort Ripley, told KLKS on Friday that he will not vote for the Marriage and Family Protection Act, a bill that would make Minnesota’s marriage laws gender-neutral, allowing same-sex couples many of the rights currently denied by Minnesota statute. Koering, who is gay and a Republican, said he would vote against it because the state faces bigger problems.”

The paper adds: “Koering came out in 2005 after voting against a constitutional amendment to ban civil unions and same-sex marriage pushed by then-State Sen. Michele Bachmann. He is one of very few openly gay elected Republicans in the United States and was re-elected by his conservative Brainerd-area constituents in 2006, despite a hard push by religious right activists to defeat him for his votes on gay rights.”

Last week the bill had 5 sponsors, and 23 co-sponsors.

As part of Freedom to Marry week, hundreds of activists rallied at the state capitol in Minnesota last week in support of the Marriage and Family Protection Act. Openly gay Minnesota state senator Scott Dibble spoke at the rally. Watch his speech at the rally, AFTER THE JUMP…