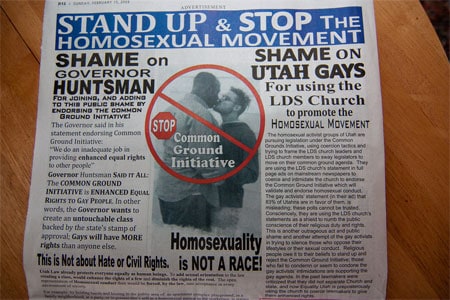 Over the weekend, blog Drinking Liberally posted photos of a full-page ad taken out in the Salt Lake Tribune by a group called America Forever.

The ad is replete with hateful rhetoric and fear tactics. In fact it’s so extreme that even those who agree with the message behind it think the group, which “does not have a current Utah business license as a nonprofit nor is it registered as a political-issues or political-action committee” according to the Salt Lake Tribune, has crossed the line with the ad, which “compares being gay to being ‘druggies and hookers,’ labels homosexuality as ‘anti-species behavior’ and concludes that ‘gays should be forced not to display’ their sexual orientation.” 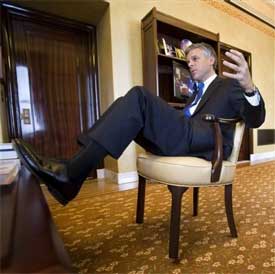 Says Gay-rights opponent Rep. Carl Wimmer, R-Herriman: “Everything they’re doing crosses the line. There’s no need to have hateful discourse. Quite frankly, they make those of us who are on the side of traditional marriage — they make a lot of us — look bad.”

The Tribune adds: “America Forever did not respond Monday to requests for comment left via voice mail and e-mail. Mike Thompson, executive director of Equality Utah — the advocacy organization for lesbian, gay, bisexual and transgender (LGBT) Utahns that is pushing the Common Ground Initiative — called the ad ‘inflammatory’ and ‘divisive.’ …’It demonstrates what we are up against in having a rational debate…There’s no reason to respond directly to the content of the ad because it’s just ridiculous. The conversation should be focused on the Common Ground Initiative and the bills that are part of that.’ MediaOne, which handles advertising, production and circulation for both The Tribune and Deseret News, said four subscribers canceled subscriptions to The Tribune on Monday in response to the ad.”

Columnist Rebecca Walsh hopes the group continues buying the ads. She says they’re likely to backfire and will infuse the Tribune with much-needed ad spending: “Despite their reputations, most Utahns are moderates. They are uncomfortable with America Forever’s over-the-top homophobia.” 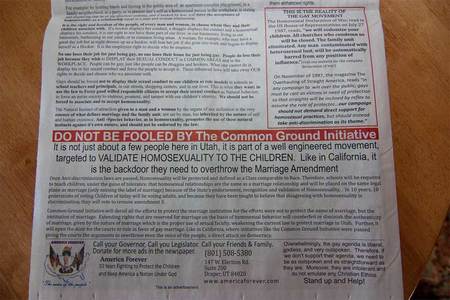