House Bill 444, Hawaii's civil union bill, began early yesterday as more than one thousand signed up to testify, and as of the writing of this post was still underway (see embed video AFTER THE JUMP and it may still be running): 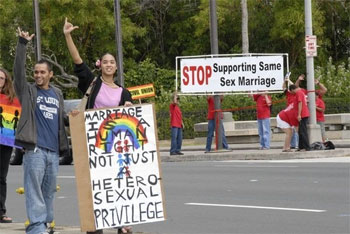 KGMB reports: "The controversial issue packed the capitol auditorium. Tuesday morning, it was standing room only; every seat was taken. Tuesday night, after hours of discussion, the auditorium was emptier, but the debate went on as the 6-member Senate Judiciary committee heard testimony to pass or kill the civil unions bill. The bill would give same-sex couples the same rights as opposite-sex couples. 1400 people signed up to speak before the committee. 'Children of same sex couples are currently without the same family protection and benefit provided to children of opposite sex couples,' said a woman in support of the legislation. One man also talked about children as reason to stop the bill from going forward. 'If this bill goes forward the children in the next generation will not know what a a family resembles and their psychological state would be slanted and totally out of place,' he testified."
The Star Bullletin reports that "12 hours of passionate testimony failed to break the 3-3 deadlock in the Senate Judiciary Committee, and a civil-unions bill for gay couples remain stuck in committee."
Senate leaders have said that if the debate continues to result in this deadlock they will yank the bill from committee for a vote in the full senate, where they say it has the votes to pass.
Watch testimony, if it's still ongoing, AFTER THE JUMP…