A Missouri lawmaker believes her sexual orientation was what lead to the rejection of her appointment to a committee on children and families: 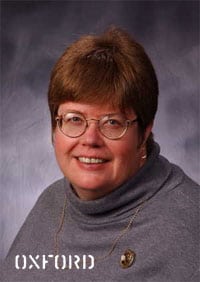 “Rep. Jeanette Mott Oxford, a St. Louis Democrat who is gay, was put forward by her party last month as one of its five appointees to the Special Standing Committee on Children and Families. But House Speaker Ron Richard, a Joplin Republican, rejected her appointment and selected another Democratic lawmaker instead. In the weeks since, Oxford says she has not received a convincing explanation for why she was left off the committee. ‘The only reason cited to me so far as for why I am not on the committee is that ‘some members find me offensive,” Oxford wrote in a letter last month to Richard. ‘I do not know if this is about my sexual orientation, my stance on Roe vs. Wade, or what.’ Richard and the committee’s leaders, however, say no personal issues weighed into the decision. Richard said he passed over Oxford to appoint Rep. Michael Corcoran, a St. Louis County Democrat with whom he has a good relationship and who had expressed interest in the committee.”

Oxford’s background shows qualification for the committee: “Oxford is one of two openly gay lawmakers in the House. She has served on committees concerning children and families since entering the legislature in 2005, and has years of professional and volunteer experience in children’s and poverty issues. If appointed, she would have been the committee’s ranking Democrat.”

Missouri’s statewide organization advocating for lesbian, gay, bisexual, and transgender equality, PROMO, has begun a “thank you” note campaign to the lawmakers who rejected Oxford, sending thank you notes for “providing proof that discrimination is alive and well in (the) Missouri Legislature.”