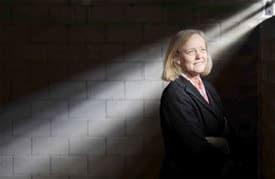 “Explaining her support for Proposition 8, the November measure that banned same-sex marriage, she called it a ‘matter of personal conscience and my faith.’ But Whitman, a Presbyterian who supports gay civil unions, said the thousands of same-sex marriages that took place last year before the ban should be legally recognized — a sentiment opposed by many Proposition 8 backers. Moreover, she said, gay and lesbian couples should be able to adopt children.”

Too bad you can’t believe in banning them and recognizing them at the same time.