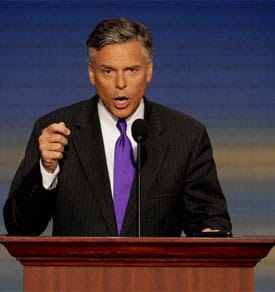 POLITICO: You’ve changed your position on gay rights. What prompted that?

HUNTSMAN, JR: Well, I’ve always been in favor of greater equality. My first year in office I ran a…reciprocal beneficiary rights piece of legislation. It failed, but my first year in office I wanted to see if we could do more in the name of individual rights. And I’ve always thought that we were a little bit behind in terms of equality for people born under the same constitution.

POLITICO: In December you talked about people 40 and under having a very different view on the environment. Is there a similar generational gap on gay rights?

HUNTSMAN, JR: You hit on the two issues that I think carry more of a generational component than anything else. And I would liken it a bit to the transformation of the Tory Party in the UK…They went two or three election cycles without recognizing the issues that the younger citizens in the UK really felt strongly about. They were a very narrow party of angry people. And they started branching out through, maybe, taking a second look at the issues of the day, much like we’re going to have to do for the Republican Party, to reconnect with the youth, to reconnect with people of color, to reconnect with different geographies that we have lost.