Activists have begun organizing an immediate nationwide response to the California Supreme Court's ruling on Proposition 8, whenever it might come. The Court is required to rule within 90 days of the hearing but a decision could come at any time. 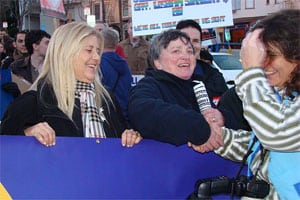 Robin Tyler, one of the original plaintiffs (with her wife Diane Olson) in the case that won same-sex marriage for Californians, is spearheading the action with co-organizer Andy Thayer and others have joined: "National groups including, Join the Impact, Centerlink, (the
National Association of LGBT Community centers), Metropolitan Community
Churches & others have signed on to help organize across the
nation. 'We've seen a tremendous outpouring from LGBT and allied individuals
and organizations who wanted to join together in unity the night of the
decision regardless of the outcome,' said Tyler."

Activists are planning for a unified effort, whether it be a protest or celebration. Those wanting information or are interested in organizing the movement in their city can go to the Day of Decision website.

Previous Post: « Stuart Milk to Rally Against Anti-Gay Discrimination in Florida
Next Post: Javier Beltran on His Sex Scenes with Robert Pattinson »