On March 4, 2008, the Supreme Court heard arguments that ultimately lead them to the rule the state’s ban on same-sex marriage unconstitutional a little more than two months later. On March 5, this Thursday, they’ll again hear arguments on that topic, this time on whether Proposition 8, the voter-imposed ban on same-sex marriage, is constitutional.

The Mercury News: “The question is whether amajority of the justices will defer to popular will or, having alreadydeclared that preventing gay people from marrying was unconstitutional,will do so again. Legal experts say it is a tough call and that the court’s decision, due within 90 days, will be debated for years to come…Legal experts say Proposition 8, which won52 percent of the vote, would almost certainly stand if not for onenotable fact: the marriage amendment represents the first time inCalifornia history that the constitution was changed at the ballot boxto deprive a protected minority group of a right expressly carved outby the court.” 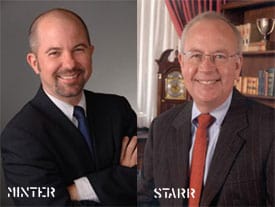 Over the weekend, the Sacramento Bee previewed this week’s face-off with a look at the attorneys on each side, Kenneth Starr and Shannon Minter — the former an erstwhile federal judge, U.S. solicitor and the lead prosecutor in the Bill Clinton/Monica Lewinsky hearings, and the latter a transgender man who successfully argued the same-sex marriage case before the court a year ago.

The Bee reports: “Minter calls Thursday’s proceedings ‘much bigger’ than the case lastMay that invalidated Proposition 22; approved in 2000, it also limitedmarriage to a man and a woman. ‘This is now about whether amajority can take away an inalienable right from one group ofCalifornians,’ Minter said. ‘If the court were to say it’s OK … then noone’s rights would mean very much.’ Starr did not respond tointerview requests. But his co-counsel, Folsom attorney Andrew Pugno,disagreed with Minter’s contention that Proposition 8 should never havebeen on the ballot.”

Here’s an interview Minter gave to Towleroad at the Democratic National Convention in Denver before Proposition 8 was approved by voters:

Nationwide vigils are scheduled for Wednesday night across California. Find out more about one in your town at EveOfJustice.com or MarriageEqualityUSA.org. Marriage Equality USA is just $18,000 short of the financing they need to secure a jumbotron for Thursdays hearings just outside the California Supreme Court.

Sean Chapin created a video about the upcoming Wednesday night events. Watch it,
AFTER THE JUMP…