Earlier today I posted that Rep. Ellen Tauscher would be introducing a bill to repeal "Don't Ask Don't Tell". I've learned that because of the snow storm that crippled the east coast last night and into today, she'll be formally introducing it on Tuesday. 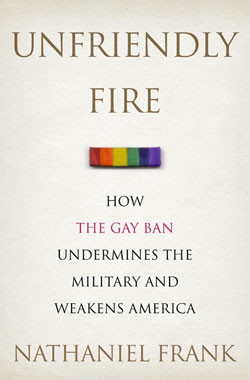 Tauscher made her announcement today at the Washington D.C. book launch of Nathaniel Frank's new book Unfriendly Fire: How the Gay Ban Undermines the Military and Weakens America

. Frank, a Senior Research Fellow at the Palm Center at UC Santa Barbara, broke the story of the firing of gay Arabic linguists under the "Don't Ask, Don't Tell" policy.

Frank's book is a companion to an upcoming PBS film I recently mentioned called Ask Not which features many of the same soldiers talking about life under the ban. Frank has also launched a web campaign to buy a book for every member of Congress, which you can join on his website.

I asked Frank if I could share some of the findings in his book, which has been lauded by the Servicemember's Legal Defense Network (SLDN), with Towleroad readers, among them that evidence has repeatedly been concealed or suppressed by themilitary when it concluded there was no rationale for the gay ban.

Here are the book's main points, according to Frank:

In behind-the-scenes negotiations about the question of gay service, senior military officers who viewed the gay ban as a moral imperative consulted with military and civilian religious leaders on a dishonest strategy to claim the ban was necessary to preserve “unit cohesion” while minimizing the true religious and cultural basis of their opposition.

General Robert Alexander, the first head of the Military Working Group, a panel of generals and admirals that essentially wrote “don’t ask, don’t tell,” acknowledged that its members did not understand what “sexual orientation” meant, and “had to define in the first few sessions what we figured they were talking about.” Alexander admits that the MWG “thought they knew the results of what was going to happen” before they met, and that it was “going to be very difficult to get an objective, rational review” of the policy. “Passion leads and rationale follows,” he says, adding that his group “didn’t have any empirical data” about gay service and the MWG position was based on fear, politics and prejudice.

Sen. Sam Nunn, chief Congressional architect of the ban, revealsthat he believes his own policy is now“getting in the way” of military readiness.  Although Nunn said lastyear that he would support taking “another look” at the policy, hisremarks in the book go much further by criticizing the policy asharmful to the military.

According to witnesses and activists, Sam Nunn’s hearings aboutgay service were “rigged” from the start. Judith Stiehm, a professor atFlorida International University, found that Professor Charles Moskos,a personal friend of Nunn’s who is credited as the academic architectof the policy, “had already found an agreement” with Nunn before thehearings began. Nunn removed two witnesses when he learned they wouldoppose the gay ban, retired colonel Lucian Truscott III and formersenator Barry Goldwater, and placed a virulently homophobic general onan “academic panel” (he was not an academic).

ProfessorCharles Moskos, chief architect of the policy, admits he defended hispolicy in part because he worried he would disappoint his friends if he“turncoated.” Moskos also admits in the book that “unit cohesion” isnot the real reason he opposed openly gay service; he says “Fuck unitcohesion; I don’t care about that.” Despite rooting his publicopposition to openly gay service in unit cohesion, he says the realreason is the “moral right” of straights not to serve with known gays.In fact, Moskos told lawmakers that the principalreason for the gay ban is to repress the homoerotic desire that is aninherent part of military culture. This “homoerotic thesis” explainswhy “don’t ask, don’t tell” does not bar the presence of homosexualitybut the mention of it, and gives the lie to the “unit cohesion” ruse.

Admiral William Crowe,the Chairman of the Joint Chiefs of Staff under Reagan and Bush I,reversed course and opposed the gay ban last year just before he died.Crowe is only the second JCS chairman to oppose the gay ban.

Admiral John Hutson, former JAG of the Navy and a supporter ofthe gay ban in the internal Navy debates over gay service in 1993, says that senior military officers exaggerated the risks to unitcohesion while minimizing the true religious and cultural basis oftheir opposition to gay service. He says the Navy brass “declined” todiscuss the issue in terms of morality even though moral animus againsthomosexuality was the real reason they resisted the change. In fact,Hutson, who now opposes “don’t ask, don’t tell,” calls the policy a“moral passing of the buck” because senior military and politicalleaders tried to blame the supposed intolerance of young recruits forthe ban.  None of the Navy officials responsible for helping formulatethe policy “had much of a sense of what was going on,” he says, and“decisions were based on nothing. It wasn’t empirical. It wasn’tstudied, it was completely visceral, intuitive.” The policy was createdentirely “by the seat of our pants”.