In a piece in The New Republic, James Kirchik paints a picture of conservative AIDS policy under the Bush administration and the rigors undergone by those put in place to enforce it by comparing the circumstances leading to the recent ousting of Bush appointee Mark Dybul (U.S. Global AIDS Coordinator) under Obama against those that lead to the firing of his predecessor Scott Evertz (director of the Office of National AIDS Policy), under Bush: 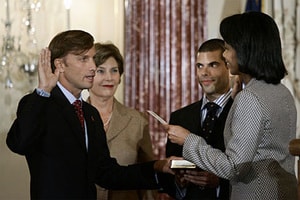 "What's ironic about the Bush administration's legacy on AIDS is that
Evertz, its first 'AIDS czar,' was a conservative who got the ax
because of his association with liberals, while Mark Dybul (pictured, right), initially a
skeptic of the Bush administration and 'the furthest thing from a
Republican or a conservative,' in the words of a former colleague, was
forced out for going too far to mollify the religious right. Days after
Dybul's departure, former Bush speechwriter Michael Gerson attacked the
Obama administration officials who orchestrated his ousting in The Washington Post,
writing that 'this type of captivity to extreme interests is precisely
what has discredited Democrats so often in the past.' This was a
hypocritical allegatio
n coming from one of the chief architects and
nurturers of the alliance between the Bush administration and the
Christian right."

Do or Dybul [the new republic]