Charles Carlson, an openly gay candidate for Minneapolis City Council, has dropped out of the race, the Minnesota Independent reports, following revelations that he fabricated his biography, deceiving financial supporters and the Minneapolis gay community: 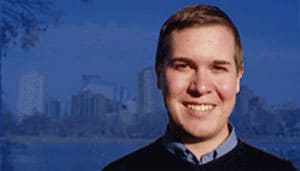 The lies were uncovered by a Star Tribune gossip columnist who discovered a police report for harassment by a former boyfriend. Carlson had also been ordered to a mental institution for schizophrenic affective disorder by a Court in 2003.

Carlson announced his withdrawal on his campaign site, but offered a different reason for dropping the campaign: "This past week, I was offered an opportunity to officiate professional
tennis at various tournaments around the world. With this presented to
me, I cannot whole-heartedly continue this campaign."

The paper adds: "The openly gay Carlson received a large amount of financial, volunteer
and in-kind support from Minneapolis’ LGBT community and businesses
over the course of his campaign, as well as from University of
Minnesota students, where Carlson was enrolled."