Last July, you may remember that Steven Paul Hirschfield, a 37-year-old dancer, was shot and killed
by police who were sent to rescue him after Hirschfield went overboard
on a nighttime boat cruise at the San Diego Gay Pride Celebrations. Hirschfield was hired to dance at the party. Toxicology tests found amphetamines, methamphetamine, the sedative doxylamine, and ketamine in Hirschfield's system. The San Diego Harbor Police officer responsible for the shooting has been cleared of wrongdoing: 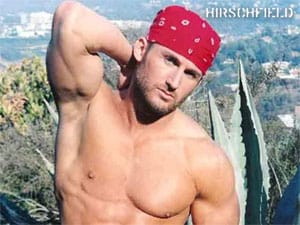 "District Attorney Bonnie Dumanis announced in a letter dated Thursday
that Officer Clyde Williams was justified in shooting Steven Paul
Hirschfield, 37, of Los Angeles. The letter states Williams' “use of
deadly force was reasonable under the circumstances.” Williams and his partner, Wayne Schmidt, were sent to pull
Hirschfield from the water about 11 p.m. after Hirschfield refused to
get into the ship's rescue boat, according to the district attorney's
letter. Hirschfield eventually used a bow line thrown by the
officers to pull himself onto their patrol boat, but he scuffled with
them once on board, the letter states. Brian Claypool, an attorney for Hirschfield's family,
disputes that Hirschfield willingly entered the boat, saying the
officers are distorting what happened to make it look like they
followed procedure. 'They don't want to make it seem that they forced him onto the boat and escalated the situation,' Claypool said. Schmidt told investigators that during the scuffle on the rear deck of
the patrol boat, he was pinned to the deck by Hirschfield, whose 'right
hand was moving around under my left leg for the Taser.' Williams said he heard Schmidt shout, 'He's got my gun!
He's got my gun! Shoot him! Shoot him!,' and shot Hirschfield in the
back in response. The letter states Hirschfield's DNA was found on Schmidt's holster, handgun and Taser, proving he came in contact with them."