A same-sex marriage bill in New Hampshire headed to the House floor yesterday after a House committee deadlocked 10-10 on whether or not to support it: 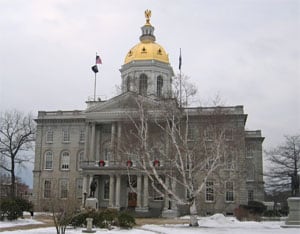 "The split vote means that the bill will go to the whole House next week
for a debate and vote without any recommendation from the House
Judiciary Committee, which vetted the bill. The committee also
deadlocked on another hot-button social issue yesterday, voting 10-10
on whether to forbid discrimination against transgender individuals.
Most Democrats on the panel voted in
favor of gay marriage, but committee Chairman David Cote did not join
them. Afterward, Cote, a Nashua Democrat, praised the same-sex civil
union law that passed the committee on his watch in 2007 but said he
thinks neither his constituents nor the state as a whole is 'ready to
take that final step.'
… Democratic proponents called the bill simply an equal-rights measure
for same-sex couples, who at present qualify for civil unions, not
marriage, in New Hampshire. Republicans painted the bill as an attempt
to rewrite the longstanding rules of a societal institution, a move
that would open the door to further rewriting that, some warned, could
include allowing incest, polygamy or bestiality. "