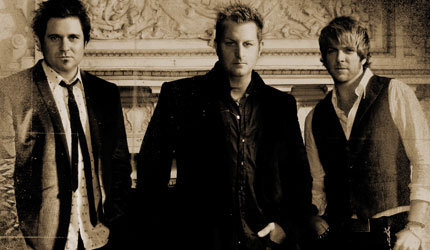 Gary LeVox, Jay DeMarcus, and Joe Don Rooney, the trio who make up the country pop band Rascal Flatts, released a new single today called "Love Who You Love" which some of their fans are interpreting as an anthem of acceptance and love for their gay fans because of its non-gender-specific lyrics. The band is welcoming that interpretation.

LeVox tells CMT: "We actually have some gay people that work with us, and we have alot of friends that are gay, too, and I know that this song hasinspired them. I know that coming out was tough on their parentsand on them and the whole entire family. For a long time, some of themdidn’t get to hear ‘I love you’ from their dads or be accepted in thatway. It’s helped a lot of our friends."

Guitarist Rooney adds: “That’s what’s cool about our music. You can interpret (it like) that. Ifyou get that — it’s perfect. If you are someone who’s gay or someonewho’s straight, you still feel something from the song, and that’s whatwe want.”

Listen to the track (YouTube while it lasts), AFTER THE JUMP…

"Love Who You Love"