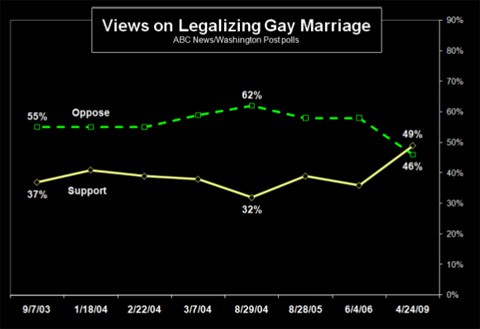 A new ABC/Washington Post poll shows that for the first time ever, supporters of same-sex marriage in the U.S. outnumber opponents. These are even better numbers than the stunning CBS Poll released just two days ago which found that 42% of Americans support marriage equality.

"Take gay marriage, legal in Massachusetts, Connecticut and now Iowa,
with Vermont coming aboard in September. At its low, in 2004, just 32
percent of Americans favored gay marriage, with 62 percent opposed. Now
49 percent support it versus 46 percent opposed — the first time in
ABC/Post polls that supporters have outnumbered opponents. More than half, moreover — 53 percent — say gay marriages
held legally in another state should be recognized as legal in their
states. The surprise is that the shift has occurred across ideological
groups. While conservatives are least apt to favor gay marriage,
they've gone from 10 percent support in 2004 to 19 percent in 2006 and
30 percent now — overall a 20-point, threefold increase, alongside a
13-point gain among liberals and 14 points among moderates.
(Politically, support for gay marriage has risen sharply among
Democrats and independents alike, while far more slightly among
Republicans."