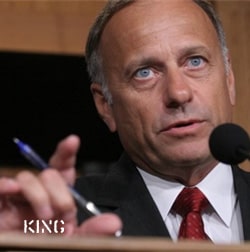 “This is an unconstitutional ruling and another exampleof activist judges molding the Constitution to achieve their personalpolitical ends. Iowa law says that marriage is between one man and onewoman. If judges believe the Iowa legislature should grant same sexmarriage, they should resign from their positions and run for office,not legislate from the bench.

“Now it is the Iowa legislature’s responsibility to pass theMarriage Amendment to the Iowa Constitution, clarifying that marriageis between one man and one woman, to give the power that the SupremeCourt has arrogated to itself back to the people of Iowa. Along with aconstitutional amendment, the legislature must also enact marriagelicense residency requirements so that Iowa does not become the gaymarriage Mecca due to the Supreme Court’s latest experiment in socialengineering.”

Unfortunately for King the leaders of the Iowa legislature are fully behind the decision as evidenced by the dual statement from House Speaker Pat Murphy and Senate Majority leader Mike Gronstal earlier today.

Another thing that should be noted. The judge who wrote the opinion in the case was appointed by conservative Republican Governor Terry Brandstad.

It seems Republicans are behind most of the major favorable same-sex marriage decisions in recent history.

Watch another bigot, Chuck Hurley of the Iowa Family Policy Center, who you may remember organized a huge demonstration of hundreds of anti-gay bigots in January 2008 to pressure the Supreme Court on same-sex marriage, react to the court's ruling today, AFTER THE JUMP…