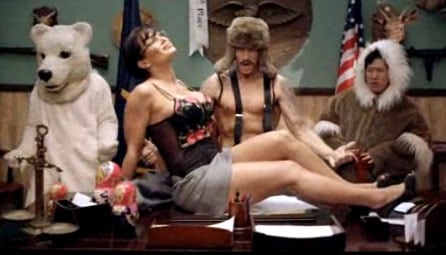 The track "We Made You" takes potshots at Kim Kardashian, John Mayer, Jessica Simpson, Jessica Alba, Brett Michaels, Ellen DeGeneres, and many more.

MTV reports: "We also see him as a truck driver who has picked up Lindsay and Sam,who are all over each other in his cab. Eminem 2.0 says he's not tryingto offend lesbians as he begs, 'Lindsay, please come back to seein'men/ Samantha's a 2; you're practically a 10.' And for no reason we candiscern, when he touches Sam, he shakes his hand as if getting burnedand turns into a Transformer with a Mohawk, breasts and a coffee cup. The multiple disses in the video seem to be inspired by thetrack's sing-songy chorus: 'When you walked through the door, it wasclear to me/ You're the one they adore, who they came to see/ You're arock star, everybody wants you.'"

Previous Post: « Kelly Clarkson’s #1 Fan in a Towel Does Not Hook Up
Next Post: Adam Lambert’s Gay Kiss Photos Get Bill O’Reilly Excited »