Enrique Iglesias talked to the UK's Mirror. They asked him if he'd consider doing underwear ads like David Beckham, which inspired a discussion of his man parts: 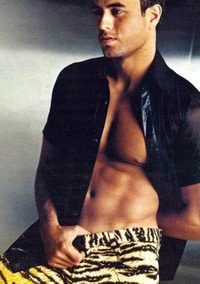 "I don’t think I have the package for that! If they can Photoshop the
pictures and make my manhood look bigger, then maybe. But they must
have done that with Beckham, right?…Having said that, it’s a good thing if I say I have a small one,
because then you’ve got the element of surprise. When people see it
they’ll go, ‘Wow, it’s not as small as I thought it was going to be!’
The best thing to do is start dating a girl with small hands…I was interviewed by a sexologist once who told me the average size is
five-and-a-half inches, so I measured myself. There were a bunch of
sleepless nights after that, let me tell you. No, I’m kidding – I’m
doing OK down there."

As you may remember, Iglesias has broached this subject in the past.

The tab then asks if he'd ever think about posing naked: "Hell, no! I don’t look good naked. I’ve got chicken legs and my balls
hang too low. I hear they get lower and saggier as you get older, and
that’s f**ked up. I’ll have to tuck mine into my socks."