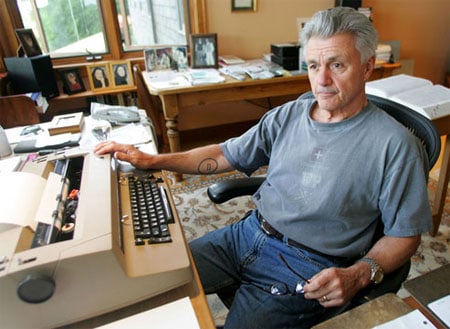 As I post this, the debate over same-sex marriage is underway in the Vermont House.

Via Rex Wockner comes this letter heterosexual author and Vermont resident John Irving sent to his friend, the gay author Edmund White. White told Wockner that Irving wanted it to be made public. You may remember an item I posted in January in which Irving expressed his admiration for White's writing. 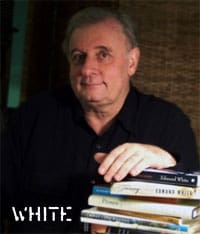 It's interesting that, as you and I are comparing our calendars to see when we might get together in Vermont — and while we are both engaged in overseeing the editing and copy-editing phase of our new books — my fellow Vermonters are deciding the fate of a gay marriage bill, which I very much support, and which has been supported by the Vermont State Senate (by a wide margin).

Some years ago, I was an outspoken opponent of my fellow Democrat, Sen. Peter Shumlin — then and now, the President of the Vermont Senate — on an issue having nothing to do with gay marriage. (It was a tax issue, and a school issue, called Act 60, and the disagreement between Sen. Shumlin and myself was very public. It was unfortunate, too, because we were friends — formerly neighbors in Putney –and the issue was very divisive.) Not so now, when Sen. Shumlin and I are allies on the gay marriage issue; Peter Shumlin's statements in support of gay marriage have been clear, fair, and admirable — and I've told him so. Gay rights have long been the "new" — as we both know, truly not so new — civil rights. It is heartening to see that the Vermont Senate thinks so.

I don't need to tell you that there are many people outside Vermont who are watching to see what my home state does about the S.115 legislation; I believe that gays, and all Americans committed to equality, are looking hopefully at Vermont right now. As a country, don't we lag behind Europe and Canada on the acceptance of gay people? I am proud of the Vermont Senate for passing this bill by such a commanding margin.

But wait a minute; I mustn't overlook our governor, Jim Douglas (R.). Around the state, I hear rumors that our governor has national ambitions of a conservative kind. Indeed, Gov. Douglas's threatened veto of this important and timely legislation puts him on the wrong side of history; people opposed to gay marriage will soon belong among such dinosaurs as those who stood in opposition to African-Americans in Martin Luther King's time, or those other dinosaurs who once denied equal rights for women. (I know you know about my support of abortion rights — made clear enough in "The Cider House Rules," not only in my novel but in the film I adapted from that book. Well, I feel no less strongly about my support of gay rights.)

My question for Gov. Douglas is: Why should it matter to straight couples if gay couples want to be married?  How insecure must heterosexuals be in order to feel threatened by gay marriage? Civil unions aren't good enough — they're not equal enough! Is Gov. Douglas so deaf to history that he cannot hear the most obvious and painful echoes? To say that civil unions suffice, or that they're good enough for gay people — in lieu of marriage — is akin to telling black people where to sit on the bus, or that they must use separate toilets.

By passing S.115 into law in our state, Vermont will take leadership of an issue that has embarrassed our country in the eyes of the world; by vetoing S.115, Gov. Douglas will demonstrate that he is opposed to equal rights for all. Gov. Douglas should be encouraged to stand on the right side of history, and not stand instead in history's way. But, as I said, the governor may have his own political agenda; he may be thinking beyond Vermont — possibly, he's imagining what Gov. Palin would do!

Gov. Douglas's explanation of his threatened veto is bizarre. He says the legislature shouldn't be troubled by this distraction right now; he says we have more important issues to tackle — namely, the economy. Is he just insensitive to the feelings of gay people, or is he ducking the issue — or both? Is he really saying that gay rights are light fare in comparison to the more serious business of the legislature? As for labeling the gay marriage bill a distraction, the governor's announced intention to veto the bill is what's causing the distraction!

Vermont Senator Dick McCormack (D.) said in today's Rutland Herald that the governor's stated reason for his veto "is based on a complete misrepresentation of the legislative process, and it expresses a smug disrespect for a class of his fellow humans."  (I think you and I would agree with that.)

I've sent emails to certain members of the Vermont House of Representatives — not just thank-you notes to some of my fellow Democrats, but also heartfelt thank-yous and encouragements to a couple of Republicans who support gay marriage. (Among them, my local Dorset member of the House of Representatives, the only Republican I have voted for in recent history. Patti Komline has said she will vote in support of gay marriage and to over-rule the governor's veto of the S.115 legislation; to her I gave the biggest thanks, because I know she must be taking some heat from her fellow Republicans — if not from Gov. Douglas himself.)

It's discouraging, isn't it, how long certain fights endure? I remember how some of my friends in the abortion rights battle thought the issue was over in '73, with Roe v. Wade; I doubted it — mere wishful thinking, as it turned out. And now this gay marriage business. Sometimes it feels that the gay rights battles are only beginning — which is true in one sense, though the struggle itself has been going on forever; this one will continue to be fought long after our lifetimes, you would probably agree.

Well, on that depressing note — I hope to see you soon!