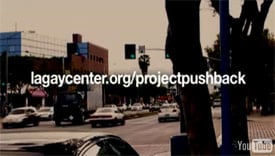 "Project Pushback isn’t about a specific election but about building support for the freedom to marry long before campaign season. The best messages will educate and persuade voters as well as motivate people who are already supportive to be more active in promoting marriage equality."

Anyone over 18 can enter and the deadline for submissions is May 18.  One Grand Prize winner will receive a cash prize of $2,500. One People’s Choice Award winner will receive a cash prize of $1,000. Everyone who votes or enters will have the chance to win a Sony HD Video Camera valued at $1,000. I've agreed to be one of the judges who weighs in after the public has voted. I hope to see something better than "The Gathering Storm."