Gay activist and playwright Larry Kramer was invited back to Yale last week to receive the first Lifetime Achievement Award from the university's Gay and Lesbian Association. 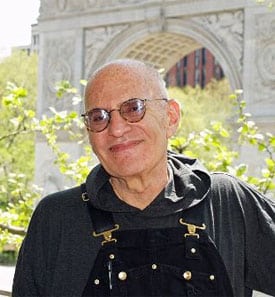 Kramer used the opportunity to rail at Yale's "conspiracy of silence" on gay history, criticizing an endowment offered to the school by his brother to set up the Larry Kramer Initiative for Lesbian and Gay Studies because it was misdirected, he says, and used for gender theory and 'queer 'studies (Kramer despises the word "queer", calling it adolescent and demeaning). Kramer wishes the school taught more about gay people in history and talks a bit about his new book, The American People.

Here's an excerpt of Kramer's speech:

Here are some of the things that I have uncovered about our history in writing my new book, The American People:

That Jamestown was America’s first community of homosexuals, men who
came to not only live with each other as partners but to adopt and
raise children bought from the Indians. Some even arranged wedding
ceremonies for themselves.

That George Washington was gay, and that his relationships with
Alexander Hamilton and the Marquis de Lafayette were homosexual. And
that his feelings for Hamilton led to a government and a country that
became Hamiltonian rather than Jeffersonian.

That Meriwether Lewis was in love with William Clark and committed
suicide when their historic journey was over and he wouldn’t see Clark
anymore.

That Abraham Lincoln was gay and had many, many gay interactions,
that his nervous breakdown occurred when he and his lover, Joshua
Speed, were forced to part, and that his sensitivity to the slaves came
from his firsthand knowledge of what it meant to be so very different.
And that the possibility exists that Lincoln was murdered because he
was gay and John Wilkes Booth, who was gay, knew this.

That Franklin Pierce, who became one of America’s worst presidents,
and Nathaniel Hawthorne, who became one of our greatest writers, as
roommates at Bowdoin College had interactions that changed them both
forever and, indeed, served as the wellspring for what Hawthorne came
to write about. Pierce was gay. And Hawthorne? Herman Melville
certainly wanted him to be.

That most of the great actresses who endlessly toured America during
the 19th century bringing theater to the masses were lesbians and
occasionally dressed as men. Just like Katherine Hepburn.

That the plague of AIDS was allowed to happen because much of the
world hates us and most of the world knows nothing about us. They don’t
know we are related to Washington and Lincoln.

I needed no queer theories, no gender studies, to figure all this out.

Why can’t we accept that homosexuality has been pretty much the same
since the beginning of human history, whether it was called
homosexuality, sodomy, buggery, hushmarkedry, or hundreds of other
things, or had no name at all? What we do now they pretty much did
then. Period. Men have always had cocks and men have pretty much always
known what to do with them. It is just stupidity and elite presumption
of the highest and most preposterous order to theorize, in these
regards, that then was different from now.

Read the full speech at The Daily Beast.