In a follow-up to his interview with actor Rupert Everett, in which Everett spewed a vitriolic rant about gays who want to be surrogate parents ("It is utterly hideous. I think
it’s egocentric and vain.") and get married, Kevin Sessums talks to AIDS activist Peter Staley, comedienne Kate Clinton, and longtime activist and playwright Larry Kramer on those topics.

Here's part of Kramer's reaction on marriage and the state of the LGBT movement: 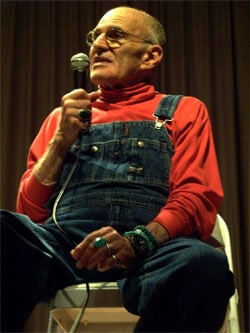 “I don’t think we are going to win anything federal—which is really
the only important place where it counts—until a few of these Supreme
Court justices expire (including that homophobe Anthony Scalia) and
Obama replaces them with people sympathetic to our side. This, of course, is by no means a sure thing. I have high hopes for
Obama, but I do not feel all warm and fuzzy that he is going to be
enough of a friend when push comes to shove. I hope I am wrong. I have
never believed in patience, but I do not see that we have either the
leaders or the troops enough—a la ACT UP—to go out there and fight. We
continue to be a passive population. It drives me nuts. It has always
driven me nuts. I do not think the gay population has been all that
rabid for gay marriage. Note that I do not use the words ‘gay
community.’ Expunge that expression from your vocabulary. We are not a
community. There are too many of us to qualify for that word, which
connotes something much smaller and more intimate than the huge
multipeopled grab bag of our rainbow coalition…

"The work, as it was done for AIDS, has been done by
relatively few warriors. And we are losing sight of the HIV/AIDS
battle. What is not being done about HIV/AIDS in the United States is
shocking. It is more than shocking. It is tragic. Three percent of the
entire population of Washington, D.C., is infected. One in ten of its
residents between the ages of 40 and 49 is infected. Seven percent of
its male African-American population is infected. Gay politics? What
gay politics? I don’t see any gay politics. I see a few lazy, torpid,
unimaginative—certainly passionless—‘organizations’ that maintain they
fight for us when what they do is relatively useless. It has never been
otherwise. I am afraid we have never ever had a decent gay
organization, outside of ACT UP, that accomplished what we need to
accomplish—which is to free ourselves from the tyranny of THEM!”