McCain advisor Steve Schmidt, who recently announced his support for same-sex marriage, will will reiterate those remarks to the Log Cabin Republicans today. Schmidt's speech will make "both policy and political arguments for a Republican embrace of same-sex marriage," CNN's Political Ticker reports. 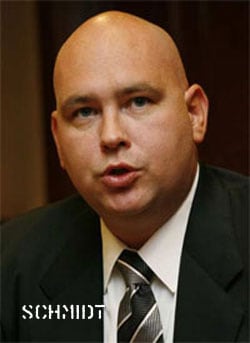 Speech excerpt: "There is a sound conservative argument to be made for same-sex
marriage. I believe conservatives, more than liberals, insist that rights
come with responsibilities. No other exercise of one's liberty comes
with greater responsibilities than marriage…It cannot be argued that marriage between people of the same sex is
un American or threatens the rights of others. On the contrary, it seems to me that denying two consenting adults of
the same sex the right to form a lawful union that is protected and
respected by the state denies them two of the most basic natural rights
affirmed in the preamble of our Declaration of Independence — liberty,
and the pursuit of happiness. That, I believe, gives the argument of same sex marriage proponents its moral force."

Schmidt met with the group in September at the Republican National Convention, thanking them for their support. At the time, he spoke of his sister, who is a lesbian. Said Schmidt at the time: "I just wanted to take a second to come by and pay my respect and the
campaign’s respect to your organization and to your group. At a
personal level, my sister and her partner are an important part of my
life and our children’s life. I admire your group and your organization
and I encourage you to keep fighting for what you believe in because
the day is going to come."

Ex-McCain aide to call for gay marriage support [the ticker]

Previous Post: « Colbert: Before Long, the Winds Will be Blowing Each Other
Next Post: Susan Boyle Cried a River Over You »