Following a class he has been teaching at the University of Georgia in Athens, Newt Gingrich commented on the recent same-sex marriage victories in Iowa and Vermont, calling the processes by which they were achieved "arrogant" and "healthier", respectively. 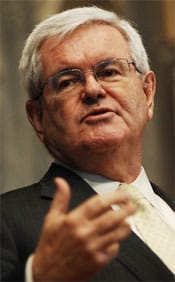 The AP reports: "Gingrich said he sees the beginning of a 'major movement' to bring the judicial branch
into check in the wake of last Friday's Iowa Supreme Court decision.
The ruling said a state law limiting marriage to a man and a woman
violates the constitutional rights of equal protection. 'It's
the height of judicial arrogance,' Gingrich said. 'You have seven
lawyers who have decided, on their own, to fundamentally change Iowa.' … Vermont's (legislative) process, Gingrich said, was 'healthier.'"

Said Gingrich: "The people of Vermont have every right to elect the legislators
they want and if they disagree with this decision they have every right
to replace them and so it is the people's branch overriding the
governor, who's elected, and it's not an isolated imposition by the
elite. Even for people who don't agree with the outcome, it's a much better process."

Gingrich is thought to be planning a run for president in 2012.

Wingnuts Tony Perkins of the Family Research Counsel, Matthew Staver of the Liberty Counsel, and the Concerned Women for America all sounded off on the Vermont victory yesterday.

They're panicking, because they've already lost.