Sordid Lives creator Del Shores (below, left) published a letter on his Facebook page yesterday explaining to fans why Sordid Lives: The Series is not moving forward into its second season. According to Shores, LOGO, which reported to him that "it was off the charts…20 times bigger than any show they had ever aired" ordered the show contingent on two other partners ordering the show, and despite the network's ordering a second season, its partners have yet to do so. 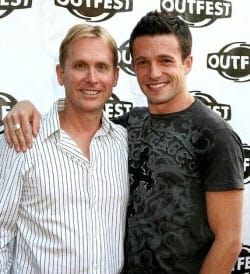 Shores has a bigger issue, however. "I'm tired of being told to be silent," he says in the letter.

Claims Shores: "The 12 episodes have now aired 262 times collectively (in Americaalone). Each time SLTS airs, the writer, director and actors are toreceive compensation — residuals. The production company is thesignatory with all the Guilds, meaning they have agreed to pay theresiduals. To this date, WE HAVE BEEN PAID NOTHING! I wrote anddirected all twelve episodes and am personally owed hundreds ofthousands of dollars. I have been paid nothing! I took a huge pay cutto do this show. I made less money in four years working on SLTS than Imade in one season on 'Queer As Folk'. The actors, who worked forminimums or slightly above, have also BEEN PAID NOTHING. The Guildshave stepped in, but these claims takes months."

Shores says his home has gone into foreclosure and credits his husband Jason Dottley (an actor in the series – pictured, right) for getting him through a difficult period: "I live daily with gratitude. Jason told me it would be okay and suggestthat I start teaching and to get back on stage to tell my stories. Idid and it saved me."

I'm tired of being told to be silent. You all deserve to know the truth about why "Sordid Lives: The Series" is not going forward into Season 2.

First of all, I want you all to know that this has been an amazing experience for me, for the cast. We love each other, we love working together. AND WE LOVE OUR FANS.

When the show premiered July 23rd, according to the executives and marketing team at LOGO, "SLTS" was in a league of its own. We were told that it was off the charts for them. That it was 20 times bigger than any show they had ever aired. I brought them stars and beloved characters and they got mainstream press — TV Guide, People Magazine, Regis & Kelly, Conan, Today Show (3 times), New York Times, Star, LA Times, Associated Press…. RAVE REVIEWS across the board! Whoopi Goldberg even called me personally and told me that she wanted me to write her into Season 2. I did!

Viewers were changing their cable companies (Direct TV, you owe me money!) LOGO was in more households than ever. Not just gay. We had crossed over! We were flying high and destined to many seasons to come! I took a big risk and it paid off.

See, usually, when you bring a network a hit, you are rewarded! And we were. LOGO ordered the 2nd season 2 weeks after we premiered. BUT, LOGO doesn't own the show. Our production company owns the series. In fact, there are three financial partners. LOGO, our production company and IMG International, who is our foreign distributor. LOGO ordered the show CONTINGENT on the other partners also ordering the show. IMG did not. They were still selling the show — and still are. They seem to be doing very well — France, Germany, Austria, Israel, Canada, Sweden and more in the wings — so they could still come in.

But a bigger problem arose. The 12 episodes have now aired 262 times collectively (in America alone). Each time SLTS airs, the writer, director and actors are to receive compensation — residuals. The production company is the signatory with all the Guilds, meaning they have agreed to pay the residuals. To this date, WE HAVE BEEN PAID NOTHING! I wrote and directed all twelve episodes and am personally owed hundreds of thousands of dollars. I have been paid nothing! I took a huge pay cut to do this show. I made less money in four years working on SLTS than I made in one season on "Queer As Folk". The actors, who worked for minimums or slightly above, have also BEEN PAID NOTHING. The Guilds have stepped in, but these claims takes months.

Actors have lost health insurance and okay, now I'm going to really get honest and bare all. I worked exclusively on "Sordid Lives: The Series" for over four years. I was contractually bound to the show and turned down many opportunities — because I was doing what I loved — writing, creating, directing my own show, with amazing creative control (thank you LOGO). It was my choice and my extreme pleasure. But I took a hit. A big hit. It was a gamble. A risk. I thought I had won.

In January, our home went into foreclosure — and yes, the producers knew about my financial situation — still refused to pay me my residuals which would have saved the house and a lot of stress. I informed the executives of LOGO, hoping they would at least step in and pay me for the scripts of Season Two (which I had written). No response from the network.

Thank G-d for friends. Thank G-d for C.R., for N.A and R.A, for B.B. For Jason's amazing family, for my kids, my ex-wife — and for the support of you, my friends and fans. You have no idea how much strength you gave me… make that — give me.

It was a crazy time. It still is.

But you know, I learned so much. I learned that things are things — and health, family, friends, and my adoring fans, are important. I am loved and I've had a good ride. I'm lucky and I am BLESSED.

I live daily with gratitude. Jason told me it would be okay and suggest that I start teaching and to get back on stage to tell my stories. I did and it saved me.

Yet, I was still fighting for "Sordid Lives: The Series". I even tried to buy the show back from the producer — knowing, I could put together the money.

But negotiations came to a screeching stop. The price was too high. We reached an impasse — and now, I have a glimmer of hope — but yes, it has faded.

And as much as I love my friends at LOGO, it did sting when they picked up a second run (reruns) of "The Sarah Silverman Program" for more money per episode than they paid for SLTS. That money could have saved our show. And no disrespect to Ms. Silverman. I LOVE her show, but that's not the point. My interpretation — "Sordid Lives: The Series" was just simply not that important for LOGO to save.

So, I must move on. I have other stories to tell. I want to see "Southern Baptist Sissies" on the big screen. I know the effect of the play. The healing. The salvation. {Anybody with a couple of mil want to make a difference, be a movie producer? 🙂 } I have other plays in me, other TV shows. Caroline Rhea, Leslie Jordan and I will bring our "A-Sordid Affair Comedy Tour" to you very soon. It's all good.

But I do have more "Sordid Lives" in me… the 2nd season was written before it all went down. I own the stage rights and the publishing — so someday, someway, you'll know how Noleta fares in the looney bin, where Brother Boy winds up… what happens to Ty and Jacob, to Latrelle, Wilson and Tomeka. You'll know if Sissy gets out of jail. And who set the fire at Bubba's? And how dear LaVonda works her magic on the masses! And how "Juanita" has at least has one clear moment.

I love you all — and if I get in trouble — I better have some lawyer fan (hopefully really cute) who will save my ass.

And as my Mama Merck used to say — "You can't get blood from a turnip."

And as the Bible says, "The truth will set you free!"