After six hours of debate the Swedish parliament voted today to adopt a gender-neutral marriage law, allowing same-sex couples in the country to marry: 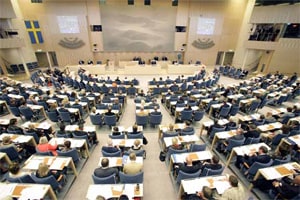 "Only the Christian Democrats, one of the four parties in the ruling centre-right coalition, opposed the move.

Supporters of the gender-neutral legislation included Evon Frid of the Left Party who said it was 'not a negative change, but a positive change.'

The new legislation is to take effect as of May 1, and replaces the legislation approved in 1995 that allows same-sex couples to form a union in Sweden via registered partnership."

Sweden now joins the Netherlands, Belgium, Spain, Canada, South Africa, Norway, and parts of the United States in allowing its gay and lesbian citizens to marry.