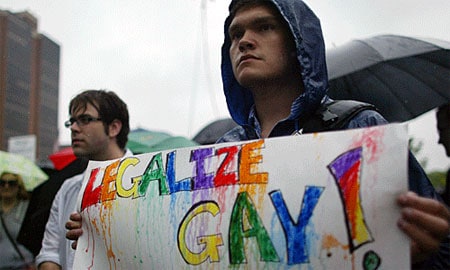 Hundreds of soggy but determined demonstrators marched through the streets of Philadelphia on Sunday at the National Equality Rally, touted by organizers of the city's Equality Forum as the largest LGBT rally in a decade and the first outside of the nation's capitol. 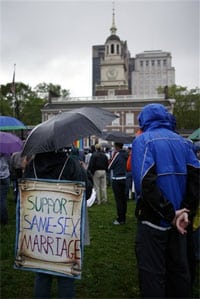 Eleven/Five reports: "The cold and rain wasn’t enough to dampen the spirits of those that braved the wet weather today at the National Equality Rally. We marched around Independence National Historic Park and rallied in front of Independence Hall and the Liberty Bell.The energy was very positive despite the ever present anti-gay protestetors. It was great to see and hear from so many of those that started the fight for equal rights for GLBT people back in 1964 in those early demonstrations. There were a lot of great speakers that had a great deal to say on ENDA, DADT and DOMA. It’s too bad that so much of the street festival was rained out, still many stuck it out!"

Gay rights pioneer Frank Kameny spoke at the rally (he's in video 4, AFTER THE JUMP. The Philadelphia Inquirer reports: "[Kameny] organized the 1965 protest in front of Independence Hall after hewas fired as an astronomer in the Army Map Service for being gay.Unable to obtain a routine hearing from the federal government'scivil-service director, he decided to travel to Philadelphia to make apoint: He wanted to demonstrate that he deserved the same rights as themen who gathered there to write the Constitution. Kameny gained plenty of notoriety, but he never did get his job back. Nor was he ever compensated for being unfairly dismissed. But as he told the rain-soaked crowd yesterday, he finally achieved a kind of 'closure' this year. When Obama held the swearing-in for his new civil-service director, John Berry, Kameny was invited to the ceremony. 'And,' he added with a laugh, 'I had the satisfaction of watching theswearing-in of an openly gay man. It was almost like a fairy-taleending.'"

CBS News reports: "A few counterdemonstrators held religious signs at the margins of thegathering, and one preached with a bullhorn as the marchers filed past." Said Equality Forum executive director Malcolm Lazin: "We don't wilt, and we don't melt. We are here for equality now."

Four clips from the march and rally, AFTER THE JUMP…