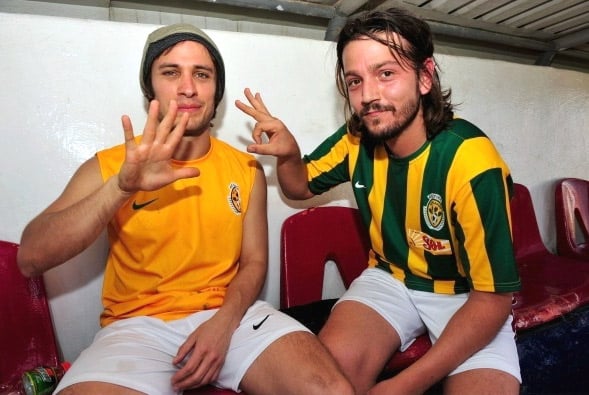 This very site has done such a fine job covering OUTRAGE, the new documentary on closeted gay/anti-gay politicans, and LITTLE ASHES, the gay Dalí/Lorca romance that I don't have to. Which is fine by me since there are so many other double sides worth discussing this week. Take the Y Tu Mama Tambien pair, Gael García Bernal and Diego Luna, who reunite for RUDO Y CURSI They make a great duo, but sadly there's no makeout session this time. They play brothers. It's not that kind of movie (sigh). Gael does a fun music video (a little Madonna Don't Tell Me-ish) for it which you can see here. Tilda Swinton fans — I hope that's you. If it's not, I don't even want to know ya –  will want to check out JULIA, in which she plays an alcoholic woman in way over her head in a kidnapping. But most of the attention everywhere this weekend will be going to STAR TREK which is a remarkably fun reboot of the 40something year old franchise. We didn't need an 11th Star Trek movie, but since we didn't need it, thank god it goes down so well with popcorn. 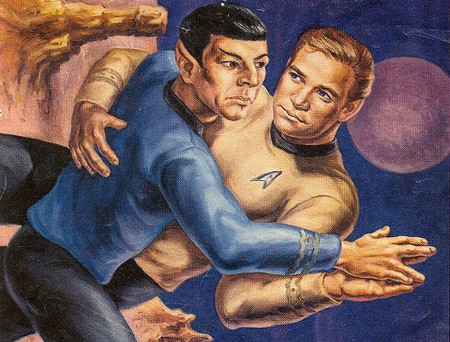 The answer, AFTER THE JUMP…

Sorry, gay Trekkies. It's not the fan romanticized Kirk/Spock pairing which created the entire subgenre now known as "slash fiction" in which beloved characters get their gay on (contemporary popular pairings include Harry Potter/Draco Malfoy and Legolas/Aragorn). No, the 11th Star Trek picture goes full tilt boogie into an Uhura/Spock romance… though this isn't without speculative precedent either. Here's a few fun videos to illustrate both. First, a hilariously winking "backrub" scene from the original Star Trek series plus a Kirk/Spock slash video. Second row, a scene where Uhura sings and flirts with Spock that gets strangely edited out of television airings. Finally a brief interview with George Takei (Lieutenant Sulu), Star Trek's real life gay hero on sexuality in the TV series and gay marriage.

Will Alias and Nip/Tuck hottie Bradley Cooper be playing The Green Lantern? This and other blockbuster casting conundrums discussed at The Film Experience.

"Don't Drop the Promotional Item" Next week's season finale of Prison Break promoted with a bar of soap? Uh… No comment.

Have you been watching Make Me a Supermodel? In Wednesday's episode (the naked episode, NSFW) blonde single mother Amanda got the boot. They thought she was trying too hard to be sexy in every photoshoot. She's trying too hard at home, too. She told the confessional cameras that she walks around naked at home because she doesn't want her son to turn out gay "no offense!" Um. Ewww! I hope she's not doing sexy posing for him, too.

New Pic: Brandon Routh has the lead role of Dylan Dog, a nightmare investigator, in the comic book adaptation Dead of Night. Still no sign of Superman Returns… Again.

Jekyll & Hyde has long served as a great metaphor for men losing their battle with their inner beast. Keanu Reeves snagged the double role in an upco ming movie. Funny, I never really thought of Keanu as someone with much going on on the inside. The outside on the other hand…