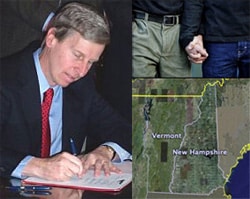 An amendment requested by Governor John Lynch to the marriage equality bill recently passed by the legislature has been approved by the Senate and sent to the House:

"The 14-10 party-line vote in the Senate accepted Lynch's proposed
language. If the House also approves the amendment, the governor could
have the bill on his desk as early as Wednesday afternoon. The House
previously passed the same-sex marriage bill 178-167."

The House is currently considering the bill.