As I mentioned yesterday, former U.S. Solicitor General Theodore B.Olson and David Boies, who represented Bush and Gore, respectively, in the contest to the 2000 election, have come together and filed a federal lawsuit against Proposition 8. Earlier today, they (as The American Foundation for Equal Rights) held a press conference. 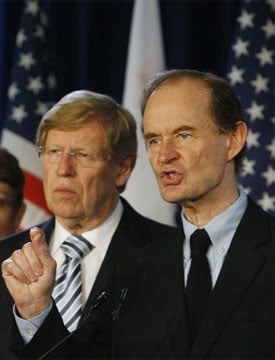 Watch the press conference,
AFTER THE JUMP…

Said Olson to the Washington Examiner last night: "I personally think it is time that we as a nation get pastdistinguishing people on the basis of sexual orientation, and that agrave injustice is being done to people by making these distinctions. I thought their cause was just. It is our position in this case that Proposition 8, as upheld by theCalifornia Supreme Court, denies federal constitutional rights underthe equal protection and due process clauses of the constitution. The constitution protects individuals' basic rights thatcannot be taken away by a vote.  If the people of California had votedto ban interracial marriage, it would have been the responsibility ofthe courts to say that they cannot do that under the constitution.  Webelieve that denying individuals in this category the right to lasting,loving relationships through marriage is a denial to them, on animpermissible basis, of the rights that the rest of us enjoy…I alsopersonally believe that it is wrong for us to continue to deny rightsto individuals on the basis of their sexual orientation." 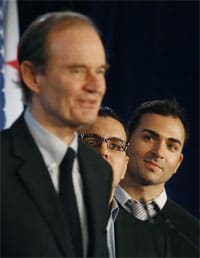 Watch the press conference, at which they are asked about their motives (because the LGBT community never thought they were pro-gay), about why it is a federal case, about whether or not they have a family member who is gay, and about the timing of the lawsuit, AFTER THE JUMP…

Olson says that he has never been part of an organization that is anti-gay: "I hope that people don't suspect my motives, but wee've had lots of conversations about this. I feel that this is the right position…We fundamentally believe what we are saying. And we're going to win this case."

Today, Freedom to Marry issued a press release with a coalition of LGBT groups warning that a federal lawsuit could set the fight for marriage back. They also released a new publication to that effect (PDF) entitled "Why the ballot box and not the courts should be the next step on marriage in California”: "This publication discourages people from bringing premature lawsuitsbased on the federal Constitution because, without more groundwork, theU.S. Supreme Court likely is not yet ready to rule that same-sexcouples cannot be barred from marriage."

Previous Post: « Rob Thomas Has a Big Gay Chip on His Shoulder
Next Post: Obama Protested for Silence on LGBT Issues at Bev Hills Fundraiser »