Chris Dodd has come out for full marriage equality. Dodd published an op-ed in the Meriden Record-Journal yesterday and on his blog, saying, "the fact that I was raised a certain way just isn’t a good enough reason to stand in the way of fairness anymore."

It never was, but at least he's realized it. 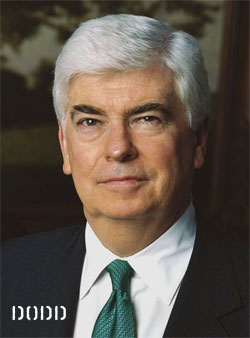 Here's what Dodd said during the Democratic primary in July 2007 at the YouTube debate.

"I'd simply ask the audience to ask themselves the question that [mywife] Jackie and I have asked: How would I want my two daughterstreated if they grew up and had a different sexual orientation thantheir parents? Good jobs, equal opportunity, to be able to retire, tovisit each other, to be with each other, as other people do. So I feelvery strongly, if you ask yourself the question, "How would you likeyour children treated if they had a different sexual orientation thantheir parents?," the answer is yes. They ought to have that ability incivil unions. I don't go so far as to call for marriage. I believemarriage is between a man and a woman. But my state of Connecticut, thestate of New Hampshire, have endorsed civil unions. I strongly supportthat. But I don't go so far as marriage."

Watch that video, AFTER THE JUMP…

In his op-ed yesterday, Dodd writes, "I believe that, when my daughters grow up, barriers to marriageequality for same-sex couples will seem as archaic, and as unfair, asthe laws we once had against inter-racial marriage. And I want them to know that, even if he was a little late, their dad came down on the right side of history."

Public officials aren’t supposed to change their minds. But I firmlybelieve that it’s important to keep learning. Last week, while I was inConnecticut meeting with members of the gay and lesbian community fromacross the state, I had the opportunity to tell them what I’ve learnedabout marriage, and about equality.

While I’ve long been for extending every benefit of marriage tosame-sex couples, I have in the past drawn a distinction between amarriage-like status (“civil unions”) and full marriage rights.

The reason was simple: I was raised to believe that marriage isbetween a man and a woman. And as many other Americans have realized asthey’ve struggled to reconcile the principle of fairness with thelessons they learned early in life, that’s not an easy thing toovercome.

But the fact that I was raised a certain way just isn’t a good enough reason to stand in the way of fairness anymore.

The Connecticut Supreme Court, of course, has ruled that such adistinction holds no merit under the law. And the Court is right.

I believe that effective leaders must be able and willing to growand change over their service. I certainly have during mine – and sohas the world. Thirty-five years ago, who could have imagined that we’dhave an African-American President of the United States?

My young daughters are growing up in a different reality than I did.Our family knows many same-sex couples – our neighbors in Connecticut,members of my staff, parents of their schoolmates. Some are now marriedbecause the Connecticut Supreme Court and our state legislature havemade same-sex marriage legal in our state.

But to my daughters, these couples are married simply because theylove each other and want to build a life together. That’s what we’vetaught them. The things that make those families different from theirown pale in comparison to the commitments that bind those couplestogether.

And, really, that’s what marriage should be. It’s about rights and responsibilities and, most of all, love.

I believe that, when my daughters grow up, barriers to marriageequality for same-sex couples will seem as archaic, and as unfair, asthe laws we once had against inter-racial marriage.

And I want them to know that, even if he was a little late, their dad came down on the right side of history.

I have always been proud of my long record fighting for the civilrights of the LGBT community. I’ve co-sponsored legislation tostrengthen hate crime laws and end discrimination in the workplace.I’ve spoken out against “don’t ask, don’t tell” and always supportedequal rights for domestic partnerships.

But I am also proud to now count myself among the many electedofficials, advocates, and ordinary citizens who support full marriageequality for same-sex couples.

I understand that even those who oppose discrimination mightcontinue to find it hard to re-think the definition of marriage theygrew up with. I know it was for me.

But many of the things we must do to make our union more perfect –whether it’s fighting for decades to reform our health care system orstruggling with a difficult moral question – are hard. They take time.And they require that, when you come to realize that something isright, you be unafraid to stand up and say it.

That’s the only way our history will progress along that long arc towards justice.

Previous Post: « Obama Jokes About Being ‘in Bed’ with Brian Williams
Next Post: Bachelor Lance Bass Leaves Lustful Lady in the Lurch »